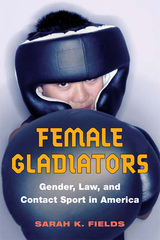 Female Gladiators is the first book to examine legal and social battles over the right of women to participate with men in contact sports. The impetus to begin legal proceedings was the 1972 enactment of Title IX, which prohibited discrimination in educational settings, but it was the Equal Protection Clause of the U.S. Constitution and the equal rights amendments of state constitutions that ultimately opened doors. Despite court rulings, however, many in American society resisted—and continue to resist—allowing girls in dugouts and other spaces traditionally defined as male territories.

Inspired, women and girls began to demand access to the contact sports which society had previously deemed too strenuous or violent for them to play. When the leagues continued to bar girls simply because they were not boys, the girls went to court. Sarah K. Fields's Female Gladiators is the only book to examine the legal and social battles over gender and contact sport that continue to rage today.

AUTHOR BIOGRAPHY
Sarah K. Fields is a professor in communication at the University of Colorado-Denver. She is the author of Game Faces: Sport Celebrity and the Laws of Reputation and coeditor of Sport and the Law: Historical and Cultural Intersections.
REVIEWS
"Female Gladiators is the first book to examine the legal and social battles that won women the right to participate with men in contact sports."--Diverse: Issues in Higher Education


"A compelling study. . . . A sound, grounded, meticulous, and careful reading of a thorny and heated issue."--Aethlon: Journal of Sport Literature


"Professor Fields makes a fresh and excellent contribution to the literature by suggesting that the intensity of opposition to female football and baseball players was not simply--as is conventional wisdom--a somewhat quaint paternalistic protection of the ‘weaker sex,' but rather due to the role of these major sports in promoting the American construct of masculinity and the desire to save these sports as a male ‘preserve' as gender roles are deconstructed."--Stephen F. Ross, Penn State University