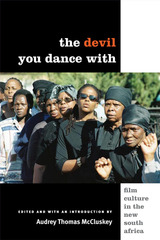 South African film culture, like so much of its public life, has undergone a tremendous transformation during its first decade of democracy. Filmmakers, once in exile, banned, or severely restricted, have returned home; subjects once outlawed by the apparatchiks of apartheid are now fair game; and a new crop of insurgent filmmakers are coming to the fore.

This extraordinary volume presents twenty-five in-depth interviews with established and emerging South African filmmakers, collected and edited by Audrey Thomas McCluskey. The interviews capture the filmmakers’ spirit, energy, and ambition as they attempt to give birth to a film culture that reflects the heart and aspirations of their diverse and emergent nation. The collection includes a biographical profile of each filmmaker, as well an introductory essay by McCluskey, pointing to the themes, as well as creative differences and similarities, among the filmmakers.

AUTHOR BIOGRAPHY
Audrey Thomas McCluskey is an associate professor of African American and African diaspora studies and served for seven years as the director of the Black Film Center/Archive at Indiana University. Her book publications include Imaging Blackness: Race And Racial Representation in Film Poster Art and Richard Pryor: The Life and Legend of a ‘Crazy’ Black Man.
REVIEWS
“This engaging and very readable book is an original and important contribution to the fields of film studies, African studies, and the sociology of race. It addresses the current state of cinema in South Africa, in which the filmmakers see cinema as a metaphor for their newly formed society as it emerges from the apartheid system.”--Manthia Diawara, author of We Won’t Budge: An African Exile in the World


“An extremely important work, The Devil You Dance With is the first comprehensive study of South African filmmaking in the critical post-apartheid period. This book gives vital insight into how globalization actually impacts a non-Western society that has few defenses beyond the awareness and canniness of the artists involved. Strongly recommended to anyone interested in film.”--Peter Davis, director of award-winning documentary films Winnie Mandela and In Darkest Hollywood: Cinema and Apartheid


"Filled with rich insights. . . . It is a gold mine for African film scholars."--Cineaste