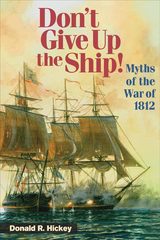 No longer willing to accept naval blockades, the impressment of American seamen, and seizures of American ships and cargos, the United States declared war on Great Britain. The aim was to frighten Britain into concessions and, if that failed, to bring the war to a swift conclusion with a quick strike at Canada. But the British refused to cave in to American demands, the Canadian campaign ended in disaster, and the U.S. government had to flee Washington, D.C., when it was invaded and burned by a British army.

By all objective measures, the War of 1812 was a debacle for the young republic, and yet it was celebrated as a great military triumph. The American people believed they had won the war and expelled the invader. Oliver H. Perry became a military hero, Francis Scott Key composed what became the national anthem and commenced a national reverence for the flag, and the U.S.S. Constitution, "Old Ironsides," became a symbol of American invincibility. Every aspect of the war, from its causes to its conclusion, was refashioned to heighten the successes, obscure the mistakes, and blur embarrassing distinctions, long before there were mass media or public relations officers in the Pentagon.

In this entertaining and meticulously researched book by America's leading authority on the War of 1812, Donald R. Hickey dispels the many misconcep-tions that distort our view of America's second war with Great Britain. Embracing military, naval, political, economic, and diplomatic analyses, Hickey looks carefully at how the war was fought between 1812 and 1815, and how it was remembered thereafter. Was the original declaration of war a bluff? What were the real roles of Canadian traitor Joseph Willcocks, Mohawk leader John Norton, pirate Jean Laffite, and American naval hero Lucy Baker? Who killed the Shawnee chief Tecumseh and who shot the British general Isaac Brock? Who actually won the war, and what is its lasting legacy? Hickey peels away fantasies and embellishments to explore why cer-tain myths gained currency and how they contributed to the way that the United States and Canada view themselves and each other.

Donald R. Hickey is a professor of history at Wayne State College in Wayne, Nebraska. His books include The War of 1812: The Forgotten Conflict, which won the National Historical Society Book Prize and the American Military Institute Best Book Award.

REVIEWS
"...[a] richly textured model of historical revisionism, which confirms Hickey's status as a leading scholar of the early national period."
--Publishers Weekly


"In this quirky, encyclopedic debunking of the mythology of the war of 1812, Donald R. Hickey displays his peerless command of the field and, with his concise, highly opinionated writing style, unlocks many of the mysteries and details of what he insists was not a second war of independence. ... Don't Give Up the Ship! belongs on the shelf of everyone deeply interested in, or who writes about, the War of 1812." -- Naval History, February 2007

"Donald R. Hickey's unique study Don't Give Up the Ship!: Myths of the War of 1812 addresses the myths, half truths, and realities of the forgotten last Anglo-American conflict. . . . The book provides a starting point for those seeking further information regarding the conflict and it should take its rightful place on the bookshelves of all War of 1812 buffs and scholars."--Journal of the Early Republic