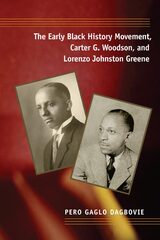 Pero Gaglo Dagbovie examines the lives, works, and contributions of two of the most important figures of the early black history movement, Carter G. Woodson and Lorenzo Johnston Greene. Drawing on the two men's personal papers as well as the materials of the Association for the Study of Negro Life and History (ASNLH), Dagbovie probes the struggles, sacrifices, and achievements of the black history pioneers and offers the first major examination of Greene's life. Equally important, it also addresses a variety of overlooked issues pertaining to Woodson, including the historian's image in popular and scholarly writings and memory, the democratic approach of the ASNLH, and the pivotal role women played in the association.
AUTHOR BIOGRAPHY
Pero Gaglo Dagbovie is University Distinguished Professor of History and Associate Dean in the Graduate School at Michigan State University. He is the author of Reclaiming the Black Past: The Use and Misuse of African American History in the Twenty-First Century and African American History Reconsidered.
REVIEWS

"Dagbovie . . . draws on the personal papers of these two seminal historians, along with materials from the Association for the Study of Negro Life and History (ASNLH), to chronicle the growth of the modern black history movement. . . . Recommended for all black history and historiography collections."--Multicultural Review


"As scholar-activists, Carter G. Woodson and Lorenzo J. Greene used their professional historical training not only to establish and further the subdiscipline of African American history, but also to help African Americans understand the importance and significance of their role in U.S. development. . . . Dagbovie has done well to highlight their careers and contributions. . . . Recommended."--Choice