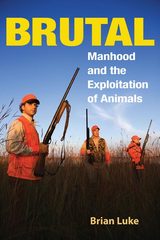 In Brutal, Brian Luke explores the gender divide over our treatment of animals, exposing the central role of masculinity in systems of animal exploitation. Employing philosophical analysis, reference to empirical research, and relevant personal experience, Luke develops a new theory of how exploitative institutions do not work to promote human flourishing but instead merely act as support for a particular construction of manhood. The resulting work is of significant interest both to animal advocates and opponents of sexism.

"Fascinating. . . . Luke makes a compelling case that constructions of manhood are deeply connected with the exploitation of animals."--Left History