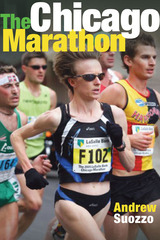 In The Chicago Marathon, Andrew Suozzo reveals this citywide ritual as far more than a simple race. Providing a full-spectrum look at the event's production and participants, Suozzo shows how the elements that comprise the marathon also reflect modern Chicago's politics, its people, and the ways the city engages with the wider world.

The book encompasses all of the forces that come together to make the race the spectacle it has become today. Beginning with a brisk history of the marathon, Suozzo leads readers from its origins in Greek mythology to its modern reality, and also along its rocky road to international prominence. He investigates the roles of sponsorship, small-business support, and the city's intervention on behalf of the marathon, as well as the alliances the event has forged with the media and charity fundraisers. He also discusses race management and the grassroots support that ultimately make it possible, with a special perspective on the aid station directors and volunteers. Finally, The Chicago Marathon features numerous interviews with the runners themselves, ranging from world-renowned professional athletes to amateurs with diverse backgrounds and abilities.

Andrew G. Suozzo Jr. is a professor of modern languages at DePaul University. He is the author of The Comic Novels of Charles Sorel and coauthor of Teaching French Culture: Theory and Practice. His article “The Chicago Marathon and Urban Renaissance” won the Russel B. Nye Award. Suozzo is also an avid amateur runner.