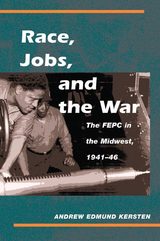 Rejecting claims that black advancement during the war was due primarily to shortages of labor, Race, Jobs, and the War contends that the FEPC made significant strides in breaking racial barriers, settling complaints, and pursuing a vigorous educational campaign to foster more harmonious industrial relations between white and minority workers.

REVIEWS
"Race, Jobs, and the War is a superb book, one that deftly illuminates the turbulent history of the FEPC."
--Clete Daniel, author of Chicano Workers and the Politics of Fairness: The FEPC in the Southwest, 1941-1945