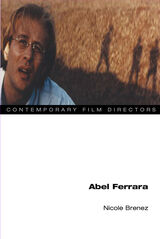 Nicole Brenez argues for Abel Ferrara’s place in a line of grand inventors who have blurred distinctions between industry and avant-garde film, including Orson Welles, Monte Hellman, and Nicholas Ray. Rather than merely reworking genre film, Brenez understands Ferrara’s oeuvre as formulating new archetypes that depict the evil of the modern world. Focusing as much on the human figure as on elements of storytelling, she argues that films such as Bad Lieutenant express this evil through visionary characters struggling against the inadmissible (inadmissible behavior, morality, images, and narratives).

Nicole Brenez is a prominent film critic and curator for the experimental cinema programs at the Cinémathèque française in Paris. She teaches cinema studies at Université Paris 3 and is the author of Shadows de John Cassavetesand other books. Adrian Martin is an associate professor in film culture and theory at Monash University. His books include Mysteries of Cinema: Reflections on Film Theory, History and Culture 1982-2016.

"This is a provocative book. It is also a work of great originality. Brenez's energetic intellect and passion for her subject are evident on every page. . . . It makes you want to go back to the films, to see them as Brenez has seen them. In fact, this was the very first thing that I did when I finished reading this book. I started watching the films of Abel Ferrara again."--Screening The Past


[Brenez's] book illuminates a director whom American critics have too often overlooked. Its mixture of fannish enthusiasm and academic erudition is a new, welcome voice."--Cineaste


“Passionate. . . . Devotees of Ferrara who are comfortable with theoretical language will find this a fascinating performance of high critical intensity.”--Film International