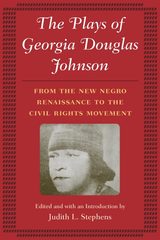 This volume collects twelve of Georgia Douglas Johnson's one-act plays, including two never-before-published scripts found in the Library of Congress.  As an integral part of Washington, D.C.'s, thriving turn-of-the-century literary scene, Johnson hosted regular meetings with Harlem Renaissance writers and other artists, including Countee Cullen, Langston Hughes, May Miller, and Jean Toomer, and was herself considered among the finest writers of the time.  Johnson also worked for U.S. government agencies and actively supported women's and minorities' rights.

As a leading authority on Johnson, Judith L. Stephens provides a brief overview of Johnson's career and significance as a playwright; sections on the creative environment in which she worked; her S Street Salon; "The Saturday Nighters," and its significance to the New Negro Theatre; selected photographs; and a discussion of Johnson's genres, themes, and artistic techniques.
AUTHOR BIOGRAPHY

Judith Stephens is a professor of humanities and theater at Penn State University, Capital College, Schuylkill Campus. She has served on the executive board of the Black Theater Network, and is the coeditor of Strange Fruit: Plays on Lynching by American Women.