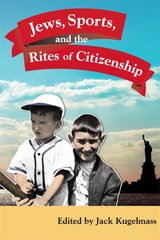 To many, an association between Jews and sports seems almost oxymoronic--yet Jews have been prominent in boxing, basketball, and fencing, and some would argue that hurler Sandy Koufax is America's greatest athlete ever. In Jews, Sports, and the Rites of Citizenship, Jack Kugelmass shows that sports--significant in constructing nations and in determining their degree of exclusivity--also figures prominently in the Jewish imaginary. This interdisciplinary collection brings together the perspectives of anthropologists and historians to provide both methodological and regional comparative frameworks for exploring the meaning of sports for a minority population.
AUTHOR BIOGRAPHY

Jack Kugelmass is a professor of anthropology and director of the Center for Jewish Studies at the University of Florida, Gainesville. He is the author of The Miracle of Intervale Avenue.