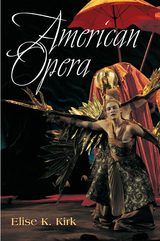 Tired of Tannhäuser? Bored with Bohème? Open your imagination to boundless creativity and wide-ranging repertory of American opera. Elise K. Kirk provides a treasure trove of information that fills in the long-neglected history of opera in the United States. Looking at more than 100 works, Kirk sketches the musical traits, provides plot summaries, describes sets and stagings, and offers in-depth profiles of performers, composers, and librettists.

Beginning with the English-influenced harle-quinade of the revolutionary period, Kirk follows the development of comic opera, the rise of melodramatic romanticism, the emergence of American grand opera and verismo, and the explosion of eclectic forms that characterized American opera in the twentieth century. Devoting particular attention to women and African American composers and librettists, Kirk explores how American operas incorporated indigenous elements such as jazz, popular song, folk music, Native American motifs, and Hollywood's cinematic techniques. She also discusses radio and television's impact, the advent of opera workshops in universities, the integration of multimedia effects into productions, and the ways innovations such as co-commissioning and joint staging have helped sustain the genre in the face of declining federal support.

AUTHOR BIOGRAPHY
Elise K. Kirk is the author of Musical Highlights from the White House and Music at the White House. She is the founder and former editor of The Dallas Opera Magazine and served on the National Advisory Board of the Kennedy Center.
REVIEWS
"Well-documented, enjoyable . . . highly recommended."--Library Journal


"An instant classic and a standard reference work in its field. Kirk is a skilled and thorough researcher with a keen sense of what is most important and interesting in the vast array of information she has explored. . . . Her work sheds new light on modern composers and works that may be familiar to American opera-lovers, and she gives a tantalizing account of long-forgotten operatic treasures from our past."--Joseph McClellan


"From melodrama to movies, Kirk creates an over-arching context that explains the unique character of American opera. Her book is an important study of the core works of the American opera canon--of value to opera producers and lovers of the art form, as well as anyone who wants to learn more about the cultural history of the United States."--Marc Scorca, president, Opera America