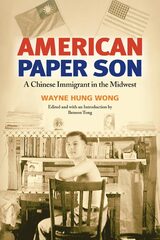 During the height of racist anti-Chinese U.S. immigration laws, illegal aliens were able to come into the States under false papers identifying them as the sons of those who had returned to China to marry and have children. American Paper Son is the story of one such Chinese immigrant who came to Wichita, Kansas, in 1935 as a thirteen-year-old "paper son" to help in his father's restaurant there.
This vivid first-person account addresses significant themes in Asian American history through the lens of Wong's personal stories. Wong served in one of the all-Chinese units of the 14th Air Force in China during World War II and he discusses the impact of race and segregation on his experience. After the war he found a wife in Taishan, brought her to the US, and became involved in the government's infamous Confession program (an amnesty program for immigrants). Wong eventually became a successful real estate entrepreneur in Wichita. Rich with poignant insights into the realities of life as part of a very small Chinese American population in a Midwestern town, this memoir provides an important new view of the Asian American experience away from the West Coast. Benson Tong adds a scholarly introduction and useful annotations.
AUTHOR BIOGRAPHY

Benson Tong is an assistant professor of government and history at Gallaudet University. He is the author of The Chinese Americans and other books.