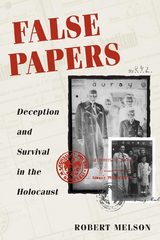 False Papers is the astounding story of a Jewish family who survived the Holocaust by living in the open. By sheer chutzpah and bravado, Robert Melson's mother acquired the identity papers that would disguise herself, her husband, and her son for the duration of the war. Always operating under the theory that one needed to be seen in order not to be noticed, the Mendelsohns became not just ordinary Polish Catholics, but the Zamojskis, a Polish family of noble lineage.
Armed with their new lives and their new pasts, the Count and Countess Zamojski and their son, Count Bobi, took shelter in the very shadow of the Nazi machine, hiding day after day in plain sight behind a façade of elegant good manners and cultivated self-assurance, even arrogance: "you had to shout [the Gestapo] down or they would kill you." Melson's father took advantage of his flawless German to build a lucrative business career while working for a German businessman of the Schindler type. The Zamojskis acquired beautiful homes in the German quarter of Krakow and in Prague, where they had maids and entertained Nazi officials. Their masquerade enabled them to save not only themselves and their son but also an uncle and three Jewish women, one of whom became part of the family.
False Papers is a candid, sometimes funny account of a stylish couple who dazzled the Nazis with flamboyant theatrics then gradually, tragically fell apart after the war. Particularly arresting is Melson himself, who was just a child when his family embarked on their grand charade. A resilient boy who had to negotiate bewildering shifts of identify–-now Catholic, now Jewish; now European aristocrat, now penniless refugee who becomes an American college student--Melson closes each chapter of his parents' recollections with his childhood perceptions of the same events.
Against the totalizing, flattening, unrelenting Nazi behemoth, Melson says, "I wished to pit our very bodies, our quirky, sexy, funny, wicked, frail, ordinary selves." By balancing the adults' maneuvering with the perspective of a child, Melson crafts an account of the Holocaust that is at once poignant, entertaining, and troubling.
AUTHOR BIOGRAPHY
Robert Melson is the current president of the International Association of Genocide Scholars. He is a professor of political science at Purdue University, Indiana, and the author of the award-winning Revolution and Genocide: On the Origins of the Armenian Genocide and the Holocaust. Michael Berenbaum, former president of the Survivors of the Shoah Visual History Foundation, is co-producer of the Academy Award-winning documentary One Survivor Remembers: The Gerda Weissman Klein Story and the author of Witness to the Holocaust and other books.