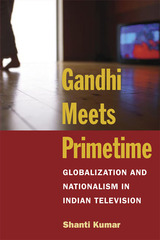 Shanti Kumar's Gandhi Meets Primetime examines how cultural imaginations of national identity have been transformed by the rapid growth of satellite and cable television in postcolonial India. To evaluate the growing influence of foreign and domestic satellite and cable channels since 1991, the book considers a wide range of materials including contemporary television programming, historical archives, legal documents, policy statements, academic writings and journalistic accounts.
Kumar argues that India's hybrid national identity is manifested in the discourses found in this variety of empirical sources. He deconstructs representations of Mahatma Gandhi as the Father of the Nation on the state-sponsored network Doordarshan and those found on Rupert Murdoch's STAR TV network. The book closely analyzes print advertisements to trace the changing status of the television set as a cultural commodity in postcolonial India and examines publicity brochures, promotional materials and programming schedules of Indian-language networks to outline the role of vernacular media in the discourse of electronic capitalism. The empirical evidence is illuminated by theoretical analyses that combine diverse approaches such as cultural studies, poststructuralism and postcolonial criticism.
AUTHOR BIOGRAPHY
Shanti Kumar is an assistant professor of communication arts at the University of Wisconsin, Madison, and coeditor of Planet TV: A Global Television Reader.
TABLE OF CONTENTS