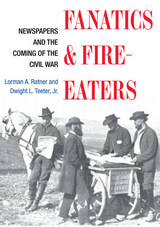 In the troubled years leading up to the Civil War, newspapers in the North and South presented the arguments for and against slavery, debated the right to secede, and in general denounced opposing viewpoints with imagination and vigor. At the same time, new technologies like railroads and the telegraph lent the debates an immediacy that both enflamed emotions and brought the slavery issue into every home.

Lorman A. Ratner and Dwight L. Teeter Jr. look at the power of America's fast-growing media to influence perception and the course of events prior to the Civil War. Drawing on newspaper accounts from across the United States, the authors look at how the media covered—and the public reacted to—major events like the Dred Scott decision, John Brown's raid on Harper's Ferry, and the election of 1860. They find not only North-South disputes about the institution of slavery but differing visions of the republic itself—and which region was the true heir to the legacy of the American Revolution.

AUTHOR BIOGRAPHY
Lorman A. Ratner was a professor of history, dean of the College of Arts & Sciences, and director of the Center of Multicultural Studies at the University of Tennessee, Knoxville. Dwight L. Teeter Jr. was a professor of journalism and electronic media and former dean of the College of Communications at the University of Tennessee, Knoxville.
REVIEWS
"A fascinating and well-written account of the role newspapers played in the years leading up to the Civil War." --North Carolina Historical Review