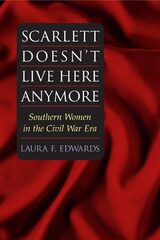 Scarlett Doesn't Live Here Anymore is a dramatic history of the South in the years leading up to and following the Civil War: a history that focuses on the women, black and white, rich and poor, who made up the fabric of southern life before the war and remade themselves and their world after it.
Positing the household as the central institution of southern society, Edwards delineates the inseparable links between domestic relations and civil and political rights in ways that highlight women's active political role throughout the nineteenth century. She draws on diaries, letters, newspaper accounts, government records, legal documents, court proceedings, and other primary sources to explore the experiences and actions of individual women in the changing South, demonstrating how family, kin, personal reputation, and social context all merged with gender, race, and class to shape what particular women could do in particular circumstances.
Meet Harriet Jacobs, the escaped slave who hid in a tiny, unheated attic on her master's property for seven years until she could free her children and herself. Marion Singleton Deveaux Converse, the southern belle who leaped out a second-story window to escape her second husband's "discipline" and received temporary shelter from her slaves. Sarah Guttery, a white, poor, unwed mother of two, whose hard work and clean living earned her community's respect despite her youthful transgressions. Aunt Lucy, who led her fellow slaves in taking over her master's abandoned plantation and declared herself the new mistress.
Through vivid portraits of these and other slaves, free blacks, common whites, and the white elite, Edwards shows how women's domestic situations determined their lives before the war and their responses to secession and armed conflict. She also documents how women of various classes entered into the process of rebuilding, asserting new rights and exploring new roles after the war.
An ideal basic text on society in the Civil War era, Scarlett Doesn't Live Here Anymore demonstrates how women on every step of the social ladder worked actively throughout the period to shape southern society in ways that fulfilled their hopes for the future. They used the resources at their disposal to fashion their own positive identities, to create the social bonds that sustained them in difficult times, and to express powerful social critiques that helped them make sense of their lives.
AUTHOR BIOGRAPHY
Laura F. Edwards is an associate professor of history at Duke University and the author of Gendered Strife and Confusion: The Political Culture of Reconstruction.