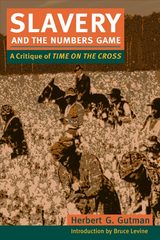 Slavery and the Numbers Game: A CRITIQUE OF TIME ON THE CROSS
by Herbert G. Gutman
University of Illinois Press, 1975
Paper: 978-0-252-07151-5
This detailed analysis of slavery in the antebellum South was written in 1975 in response to the prior year's publication of Robert Fogel and Stanley Engerman's controversial Time on the Cross, which argued that slavery was an efficient and dynamic engine for the southern economy and that its success was due largely to the willing cooperation of the slaves themselves.

Noted labor historian Herbert G. Gutman was unconvinced, even outraged, by Fogel and Engerman's arguments. In this book he offers a systematic dissection of Time on the Cross, drawing on a wealth of data to contest that book's most fundamental assertions. A benchmark work of historical inquiry, Gutman's critique sheds light on a range of crucial aspects of slavery and its economic effectiveness.

Gutman emphasizes the slaves' responses to their treatment at the hands of slaveowners. He shows that slaves labored, not because they shared values and goals with their masters, but because of the omnipresent threat of 'negative incentives,' primarily physical violence.

In his introduction to this new edition, Bruce Levine provides a historical analysis of the debate over Time on the Cross. Levine reminds us of the continuing influence of the latter book, demonstrated by Robert W. Fogel's 1993 Nobel Prize in Economic Sciences, and hence the importance and timeliness of Gutman's critique.
AUTHOR BIOGRAPHY
Herbert Gutman (1928-85) was distinguished professor of history in the Graduate College of the City University of New York and the author of The Black Family in Slavery and Freedom, 1750-1925,
Work, Culture, and Society and Power and Culture.