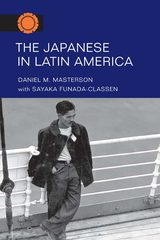 Latin America is home to 1.5 million persons of Japanese descent. Combining detailed scholarship with rich personal histories, Daniel M. Masterson, with the assistance of Sayaka Funada-Classen, presents the first comprehensive study of the patterns of Japanese migration on the continent as a whole.

When the United States and Canada tightened their immigration restrictions in 1907, Japanese contract laborers began to arrive at mines and plantations in Latin America. The authors examine Japanese agricultural colonies in Latin America, as well as the subsequent cultural networks that sprang up within and among them, and the changes that occurred as the Japanese moved from wage labor to ownership of farms and small businesses. They also explore recent economic crises in Brazil, Argentina, and Peru, which, combined with a strong Japanese economy, caused at least a quarter million Latin American Japanese to migrate back to Japan.

Illuminating authoritative research with extensive interviews with migrants and their families, The Japanese in Latin America tells the story of immigrants who maintained strong allegiances to their Japanese roots, even while they struggled to build lives in their new countries.

AUTHOR BIOGRAPHY
Daniel M. Masterson is a professor of history at the United States Naval Academy. He is the author of Militarism and Politics in Latin America: Peru from Sánchez Cerro to Sendero Luminoso and Fuerza armada en el Peru moderno, 1930–2000. Sayaka Funada-Classen is a researcher at the Institute of International Cultural Studies at Tsuda College.
REVIEWS
A CHOICE Outstanding Academic Title, 2005.
— CHOICE