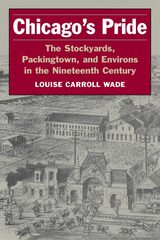 Chicago's Pride: The Stockyards, Packingtown, and Environs in the Nineteenth Century
by Louise Carroll Wade
University of Illinois Press, 2002
Paper: 978-0-252-07132-4
Chicago’s Pride chronicles the growth -- from the 1830s to the 1893 Columbian Exposition - of the communities that sprang up around Chicago’s leading industry. Wade shows that, contrary to the image in Upton Sinclair’s The Jungle, the Stockyards and Packingtown were viewed by proud Chicagoans as “the eighth wonder of the world.”

Wade traces the rise of the livestock trade and meat-packing industry, efforts to control the resulting air and water pollution, expansion of the work force and status of packinghouse employees, changes within the various ethnic neighborhoods, the vital role of voluntary organizations (especially religious organizations) in shaping the new community, and the ethnic influences on politics in this “instant” industrial suburb and powerful magnet for entrepreneurs, wage earners, and their families.
AUTHOR BIOGRAPHY
Louise Carroll Wade, a retired professor of American social and urban history at the University of Oregon, is the author of Graham Taylor: Pioneer for Social Justice, 1851-1938, and a co-author of A History of the United States (for high school students).