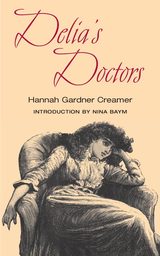 This early feminist novel is a wickedly funny slice of mid-nineteenth-century Americana peppered with details of the era’s freakish medical tactics and leavened with a smart and sassy commentary about the societal restraints on women’s physical and intellectual abilities.

First published in 1852, Delia’s Doctors is one of four known novels by Hannah Gardner Creamer, an American writer whose life and career have been all but absent from the annals of American history. In the book, eighteen-year-old Delia Thornton is ill. Her condition, more psychological than phy-sical, worsens during the bitter winter, even as doctor after doctor attempts to cure her.

As Delia typifies the female heroine whose sickness is aggravated by listlessness and inactivity, her brother’s fiancée, Adelaide Wilmot, is Delia’s more robust counterpart. Adelaide thinks she could do anything, if only she were a man, and she dreams of being a physician. Quick to point out the shortcomings of male doctors in treating female illnesses, Adelaide saves Delia and delivers a series of arguments against New England patriarchy.