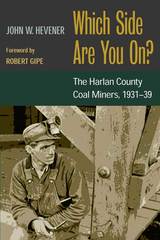 Which Side Are You On?: The Harlan County Coal Miners, 1931-39
by John W. Hevener
University of Illinois Press, 1978
Paper: 978-0-252-07077-8
Depression-era Harlan County, Kentucky, was the site of one of the most bitter and protracted labor disputes in American history. The decade-long conflict between miners and the coal operators who adamantly resisted unionization has been immortalized in folksong by Florence Reece and Aunt Molly Jackson, contemplated in prose by Theodore Dreiser and Sherwood Anderson, and long been obscured by popular myths and legends.

John W. Hevener separates the fact from the legend in his Weatherford Award-winning investigation of Harlan's civil strife, now available for the first time in paperback. In Which Side Are You On? Hevener attributes the violence–-including the deaths of thirteen union miners–-to more than just labor conflict, viewing Harlan's troubles as sectional economic conflict stemming from the county's rapid industrialization and social disorganization in the preceding decade.

Detailing the dimensions of unionization and the balance of power spawned by New Deal labor policy after government intervention, Which Side Are You On? is the definitive analysis of Harlan's bloody decade and a seminal contribution to American labor history.
AUTHOR BIOGRAPHY
John Hevener (1933-93) was a professor of history at the Ohio State University, Lima campus. Robert Gipe is director of the Appalachian Program at Southeast Community College in Cumberland, Kentucky.