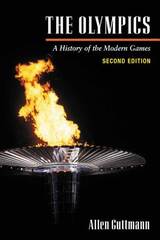 This second edition of Guttmann's critically acclaimed history discusses the intended and actual effects of the modern Olympic Games from 1896 to 2000. The glories and fiascoes, the triumphs and tragedies--Guttmann weaves them all into a vivid and entertaining social history. As Guttmann shows, politics has always been one of the Olympics' major events. He also delves into the colorful history of the athletics, from the Paris marathon course that invited French runners to take shortcuts to the odyssey of Egyptian gym teacher Youssef Nagui Assad, who made three different Olympic teams only to be recalled home each time due to boycotts. Guttmann also provides insight into the byzantine maneuvering involved in site selection, as well as little known facts about the Games' history and figures like longtime Olympics czar Avery Brundage.
AUTHOR BIOGRAPHY
Allen Guttmann, a professor of English at Amherst College, is the author of Women's Sports, Games and Empires, From Ritual to Record: The Nature of Modern Sports, and other books. He received the first President's Award for Sports Studies from the International Olympic Committee.