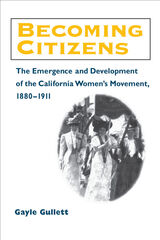 In 1880, Californians believed a woman safeguarded the Republic by maintaining a morally sound home. Scarcely forty years later, women in the state won full-fledged citizenship and voting rights by stepping outside the home to engage in robust activism.

Gayle Gullett reveals how this enormous transformation came about and the ways women's search for a larger public life led to a flourishing women's movement in California. Though voters rejected women's radical demand for citizenship in 1896, women rebuilt the movement in the early years of the twentieth century and forged critical bonds between activist women and the men involved in the urban Good Government movement. This alliance formed the basis of progressivism, with male Progressives helping to legitimize women's new public work by supporting their civic campaigns, appointing women to public office, and placing a suffrage referendum before the male electorate in 1911.

Placing local developments in a national context, Becoming Citizens illuminates the links between women's reform movements and progressivism in the American West.

AUTHOR BIOGRAPHY
Gayle Gullett is an associate professor emerita of history at Arizona State University. She is the coeditor of Contingent Maps: Rethinking Western Women's History and the North American West.
REVIEWS
"This book has long been needed. Gayle Gullett's study is a general history of women's organizations in California in the era when they appeared on the public stage and won significant victories. California was a crucial suffrage state, becoming in 1911 the sixth to give women full voting rights. It was also a key battleground for the labor movement, Populists, Socialists, and Progressives. California thus deserves more attention than it has received heretofore from historians of women, and it is an ideal location for Gullett's broad history of 'the women's movement.'"--American Historical Review


"A significant contribution to the picture of the development of the public life of American women. [Gullett] splendidly portrays the processes by which a particular group of women learned to act in public by interacting with other public actors, formulating and reformulating their agenda on the basis of their public experiences, but always from their perspective and experiences as women."--Journal of American History


"Gullett's innovative framework of concentrating on women's activism as a movement . . . not only succeeds here but may be a prototype for many studies still to be written in women's political history."--Melanie Gustafson, editor of We Have Come to Stay: American Women and Political Parties, 1880-1960