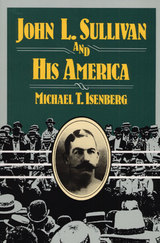 The "Great John L." reigned supreme as world heavyweight champion from his victory over Paddy Ryan in 1882 until James J. Corbett knocked him out in 1892. A drunkard, a wastrel, an adulterer, a wife beater, and a bully, Sullivan still became American's first national sports hero and represented the hopes and aspirations of millions of people.

Michael Isenberg traces Sullivan's eventful life from his humble beginnings in Boston to the height of his immense popularity. The boxer moved as easily in the world of reputable workingmen as he did in the shadowlands on the margins of the sport while his success played a major role in transforming boxing into a profitable and ultimately legitimate business. Tapping previously unexplored archival material--including the notorious National Police Gazette and the other sporting papers of the day--Isenberg tells us why presidents, princes, and turn-of-the-century Americans accepted Sullivan as a hero, even as others vilified him for his drunken and belligerent behavior.

AUTHOR BIOGRAPHY
Michael T. Isenberg (d. 1996) was an associate professor of history at the United States Naval Academy. His books include  The Puzzles of the Past: An Introduction to Thinking about History and Shield of the Republic: The U.S. Navy in an Era of Cold War and Violent Peace, Vol. I, 1945-1962.
REVIEWS
"Sullivan's story is as colorful as its large cast, which ranges from 'Little Chocolate' and 'The Bull's Head Terror' to Theodore Roosevelt. Mr. Isenberg is quite right to suggest that by following it we can learn a great deal about American society at the end of the nineteenth century. . . . No one, reading Isenberg, can fail to feel the lure of the ring."--Times Literary Supplement


"The definitive biography of the last bare-knuckle heavyweight champion. . . . A vivid re-creation of an era of unchecked male dominance."--Sports History


"A remarkable study of Sullivan's life and times. . . . A rich and valuable account of a vivid era that has long been obscured by legend."--Sports Illustrated