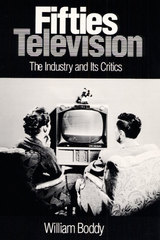 William Boddy provides a wide-ranging, rigorous analysis of the fledging American television industry during the period of its greatest economic growth, programming changes, and critical controversy. He traces the medium's development from the experimental era through the regulatory battles of the 1940s and the network programming wars of the 1950s.
AUTHOR BIOGRAPHY
William Boddy is in the department of speech at Baruch College, City University of New York, and is the author of numerous articles in journals and edited collections dealing with television and society.