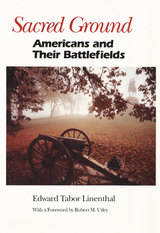 Americans have persistently expressed fascination with the nation's most
famous battlefields through patriotic rhetoric, monument building, physical
preservation, and battle reenactment. But each site is also a place where
different groups of Americans come to compete for ownership of cherished
national stories and to argue about the meaning of war, the importance
of martial sacrifice, and the significance of preserving the nation's
patriotic landscape.
From the anniversary speeches at Lexington and Concord that shaped the
image of the minuteman to Alamo Day speeches invoking the Texas "freedom
fighters" of 1836 in support of the contras in Nicaragua; from passionate
arguments over the placement of Confederate monuments at Gettysburg to
confrontations between militant American Indian Movement and "Custer
loyalists" during the Little Bighorn centennial in 1976; from the
treatment of the USS Arizona at Pearl Harbor to continuing attempts
to maintain the purity of these places in the face of commercialization---Sacred
Ground details the ongoing struggles to define, control, and subvert
patriotic faith as expressed at these ceremonial sites.