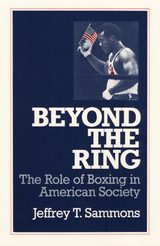 Primitive, dangerous, low-paying, crooked, exploitive--boxing, in all but a few cases, offered its athletes very little while taking everything. Why does boxing exist? What accounted for its decades-long popularity? What does its presence on the sport history landscape say about America?

Jeffrey T. Sammons looks at how boxing reflected the society that fostered it at different points in history. In the time of John L. Sullivan, the sport provided an arena for testing law, order, and social growth. Jack Johnson's career reflected the racism, nationalism, and xenophobia of the Progressive era. At its popular peak in the 1920s, boxing expressed tensions as disparate as the tug-of-war between modernism and tradition and the women's rights movement. From there, Sammons traces how the sport intertwined with Nazi antisemitism, reflected the hopes of the New Deal, produced the seminal figure Joe Louis, and stood at the nexus of the union of organized crime with business and television. Finally, he shows how Muhammad Ali and reactions to him exposed the shifting tides of racial issues and American involvement in Vietnam.

AUTHOR BIOGRAPHY
Jeffrey T. Sammons is a professor of history at New York University. He is the coauthor of Harlem's Rattlers and the Great War: The Undaunted 369th Regiment and the African American Quest for Equality.
REVIEWS
"Carefully documents the ruin waiting for almost all those ill-advised enough to become professional boxers. He confirms all the legends, of crime, of swindling, of the miserable economic rewards allotted to the vast majority of fighters . . . the traditional racism of the American ring. . . . No one, reading Sammons, can doubt that it is evil."--Times Literary Supplement


"Insightful, enjoyable, and stimulating. . . . Should be read by anyone wishing to gain a better understanding of the role that boxing has played in shaping American attitudes and values."--Journal of Southern History