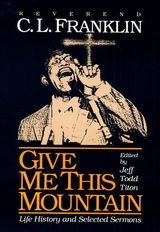 "C.L. Franklin, the most imitated soul preacher in history, was a combination of soul and science and substance and sweetness."--Reverend Jesse L. Jackson, from the Foreword
Few black preachers have been better known that the Reverend C. L. Franklin; none has been considered a better preacher. This collection of twenty of Franklin's best sermons shows the development of his style. A learned man, Franklin had attended both seminary and college, yet in his sermons used the old-fashioned, extemporaneous style of preaching, "whooping" or chanting, combining oratory and intoned poetry to reach both head and heart.
Dozens of Franklin's sermons were released on record albums, and he went on preaching tours with gospel groups that included his daughter, Aretha Franklin, reaching virtually every corner of the United States.
This volume begins with Franklin's life history, told in his own words.
In an afterword, Jeff Titon reviews the African-American sermon tradition
and Franklin's place in it.