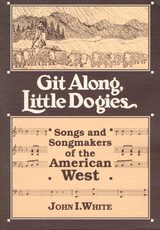 GIT ALONG LITTLE DOGIES: SONGS AND SONGMAKERS OF THE AMERICAN WEST
by John I. White
University of Illinois Press, 1975
Paper: 978-0-252-06070-0
A former singing cowboy himself, John I. White spent decades compiling information on cowboy and western songs and the artists, songwriters, and others attached to them. He also sought out and corresponded with a who's who of the genre, people like Badger Clark, Curley Fletcher, D. J. O'Malley, Romaine Lowdermilk, Will Barnes, Joseph Mills Hanson, and Owen Wister.

In Git Along, Little Dogies, White draws on old friendships and his exhaustive files to bring readers the untold story of cowboy and western song. Wonderful anecdotes stand beside White's trademark attention to detail as he painstakingly establishes the time, place, and circumstance behind each song's origin and places the music within the evolution of popular song. He also looks at how radio and recording affected the genre and shows how the music crisscrossed with pop music but also with folk and the traditional Anglo-Irish tradition.

From "Whoopee Ti Yi Yo" to "Ten Thousand Cattle Straying," Git Along, Little Dogies ventures from cow camps to saloons to big-city radio studios as it lassos a vivid piece of American music history.