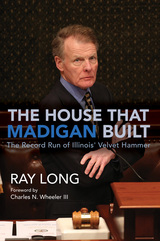 Michael Madigan rose from the Chicago machine to hold unprecedented power as Speaker of the Illinois House of Representatives. In his thirty-six years wielding the gavel, Madigan outlasted governors, passed or blocked legislation at will, and outmaneuvered virtually every attempt to limit his reach.

Veteran reporter Ray Long draws on four decades of observing state government to provide the definitive political analysis of Michael Madigan. Secretive, intimidating, shrewd, power-hungry--Madigan mesmerized his admirers and often left his opponents too beaten down to oppose him. Long vividly recreates the battles that defined the Madigan era, from stunning James Thompson with a lightning-strike tax increase, to pressing for a pension overhaul that ultimately failed in the courts, to steering the House toward the Rod Blagojevich impeachment. Long also shines a light on the machinery that kept the Speaker in power. Head of a patronage army, Madigan ruthlessly used his influence and fundraising prowess to reward loyalists and aid his daughter’s electoral fortunes. At the same time, he reshaped bills to guarantee he and his Democratic troops shared in the partisan spoils of his legislative victories. Yet Madigan’s position as the state’s seemingly invulnerable power broker could not survive scandals among his close associates and the widespread belief that his time as Speaker had finally reached its end.

Unsparing and authoritative, The House That Madigan Built is the page-turning account of one the most powerful politicians in Illinois history.

AUTHOR BIOGRAPHY
Ray Long is a Chicago Tribune investigative reporter and a two-time finalist for the Pulitzer Prize. He has covered Michael Madigan and Illinois politics for more than forty years as a journalist writing for the Chicago Tribune, Associated Press, Chicago Sun-Times, and Peoria Journal Star and The Telegraph of Alton.
REVIEWS
"Long’s account of Madigan’s legacy is a study of the practical application of power." -- Garin Cycholl, Chicago Review of Books


"An amazingly timely book that puts into perspective the historic events of last week — the federal indictment of the most powerful figure in Illinois politics. " --Shia Kapos, Politico


“It’s safe to say that no American political figure in modern times has amassed as much power--and clung to it--for as long as Speaker Michael Madigan. Ray Long masterfully chronicles this extraordinary half-century of Illinois politics, diving deep to explain how Madigan survived and thrived in Chicago and Springfield. Like so many Illinois pols before him, the Speaker’s reign ended in humiliation, but not before the ride of a lifetime. The House that Madigan Built is a page-turning read, where Long shines a new light on a time gone by in American politics.”--Jeff Zeleny, CNN chief national affairs correspondent and former Chicago Tribune reporter

PART I: THE LEGEND

PART IV: CRACKS IN THE SYSTEM