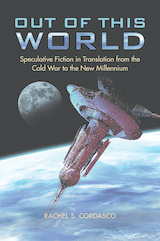 The twenty-first century has witnessed an explosion of speculative fiction in translation (SFT). Rachel Cordasco examines speculative fiction published in English translation since 1960, ranging from Soviet-era fiction to the Arabic-language dystopias that emerged following the Iraq War. Individual chapters on SFT from Korean, Czech, Finnish, and eleven other source languages feature an introduction by an expert in the language's speculative fiction tradition and its present-day output. Cordasco then breaks down each chapter by subgenre--including science fiction, fantasy, and horror--to guide readers toward the kinds of works that most interest them. Her discussion of available SFT stands alongside an analysis of how various subgenres emerged and developed in a given language. She also examines the reasons a given subgenre has been translated into English.

An informative and one-of-a-kind guide, Out of This World offers readers and scholars alike a tour of speculative fiction's new globalized era.

AUTHOR BIOGRAPHY
Rachel Cordasco founded the website SFinTranslation.com. She works as a writer, editor, and translator and is co-translator of Clelia Ferris's Creative Surgery.
REVIEWS
"Out of This World is an excellent survey of the subject-material, and very well presented. . . . She presents a good picture of these various speculative fictions and the different kinds available (in English) from these fourteen languages. . . . A useful reference work for any reader." --The Complete Review