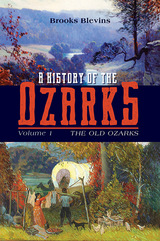 Geologic forces raised the Ozarks. Myth enshrouds these hills. Human beings shaped them and were shaped by them. The Ozarks reflect the epic tableau of the American people—the native Osage and would-be colonial conquerors, the determined settlers and on-the-make speculators, the endless labors of hardscrabble farmers and capitalism of visionary entrepreneurs. The Old Ozarks is the first volume of a monumental three-part history of the region and its inhabitants. Brooks Blevins begins in deep prehistory, charting how these highlands of granite, dolomite, and limestone came to exist. From there he turns to the political and economic motivations behind the eagerness of many peoples to possess the Ozarks. Blevins places these early proto-Ozarkers within the context of larger American history and the economic, social, and political forces that drove it forward. But he also tells the varied and colorful human stories that fill the region's storied past—and contribute to the powerful myths and misunderstandings that even today distort our views of the Ozarks' places and people. A sweeping history in the grand tradition, A History of the Ozarks, Volume 1: The Old Ozarks is essential reading for anyone who cares about the highland heart of America.
AUTHOR BIOGRAPHY
Brooks Blevins is the Noel Boyd Professor of Ozarks Studies at Missouri State University. He is the author or editor of nine books, including A History of the Ozarks, Volume 2: The Conflicted Ozarks; Ghost of the Ozarks: Murder and Memory in the Upland South; and Arkansas, Arkansaw: How Bear Hunters, Hillbillies, and Good Ol' Boys Defined a State.
REVIEWS
"Brooks Blevins has established himself as the leading historian of the Ozark Mountain region. . . . Through Blevins' history, we see the Ozarks anew." --Western Historical Quarterly


“A History of the Ozarks does not disappoint." --Agricultural History


"Brooks Blevins is an expert in weaving many diverse strands into a seamless tapestry." --Arkansas Democrat Gazett