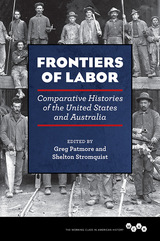 Alike in many aspects of their histories, Australia and the United States diverge in striking ways when it comes to their working classes, labor relations, and politics.

AUTHOR BIOGRAPHY
Greg Patmore is emeritus professor of business and labour history and chair of the Business and Labour History Group and Co-operative Research Group in the School of Business at the University of Sydney. His books include Worker Voice: Employee Representation in the Workplace in Australia, Canada, Germany, the UK, and the US, 1914–1939. Shelton Stromquist is professor emeritus of history at the University of Iowa. He is the author of a number of books including Reinventing""'the People"": The Progressive Movement, the Class Problem, and the Origins of Modern Liberalism.
REVIEWS
"Two of the leading comparative labour historians in Australia and the U.S., Greg Patmore and Shelton Stromquist, have joined forces to produce an outstanding edited collection comparing key aspects of Australian and American labour history. . . . Their volume is a fine example of the enormous benefits and promises that such a combined approach brings to labour history." --Moving the Social


"The essays in this volume make a splendid contribution to the important fields of US and Australian labor history."--Neville Kirk, author of Labour and the Politics of Empire: Britain and Australia 1900 to the Present


"Historians cannot do experiments with history, but we can do the functional equivalent by way of comparative history. This excellent collection compares Australian and US workplace experiences. We expect the differences; these sophisticated labor historians also attend to the surprising extent of 'commonalities,' which seem to have grown over time." --Melanie Nolan, editor of Revolution: The 1913 Great Strike in New Zealand

TABLE OF CONTENTS
Cover
Title
Copyright
Contents
Acknowledgments
US and Australian Labor: A Comparative and Transnational Perspective Greg Patmore and Shelton Strom
Part 1. The Great War: Repression and Political Countermobilization
Quite Like Ourselves: Opposition to Military Compulsion during the Great War in the United States a
Workers against Warfare: The American and Australian Experiences before and during World War I Veri
Domestic “Dogs of War” Unleashed: The Comparative Fates of Municipal Labor and Socialist Politics i
In Not a Few Respects, a Common History: Women, Wartime Lawmaking, and the Prosecution of Dissenters
Part 2. Varieties of Labor Coercion
From Whips to Wages: From Coercive to Incentive-Driven Labor Jennie Jeppesen
Union-Avoidance Strategies in the Meat Industry in Australia and the United States Marjorie A. Jerr
Part 3. Ethnicity and Class Identity: The Irish Diaspora in Australia and the United States
Catholic Irish Australia and the Labor Movement: Race in Australia and Nationalism in Ireland, 1880
Gatekeepers and “Americanizers”: Irish Americans and the Creation of a Multicultural Labor Movement
Part 4. Working-Class Collective Action and Labor Regulation
Causes of Railroad Labor Conflict: The Case of Queensland, Australia, and the Northern US Plains, 18
Comparative Mutinies: Case Studies of Working-Class Agency in the 2nd Maine Volunteer Infantry Regim
Part 5. Economic Democracy and Working-Class Institutions
How to Build a Trade Union Oligarchy: Guidance from the United States and Australia, 1886–1970 Scot
The Experience of Labor in the Age of Reform: Workers’ Subjectivity, Welfare Legislation, and Liber
Controlling Consumption: A Comparative History of Rochdale Consumer Cooperatives in Australia and th
Part 6. Transnational Working-Class Politics
Anarchy at the Antipodes: Australian Anarchists and Their American Connections, 1885–1914 Tom Goyen
An Agitator Abroad: P. H. Hickey, Industrial Unionism, and Socialism in the United States, New Zeal
Harry Bridges’s Australia, Australia’s Harry Bridges Robert Cherny
Conclusion: Harvesting the Fruits of Transnational and Comparative History Shelton Stromquist and G
Contributors
Index