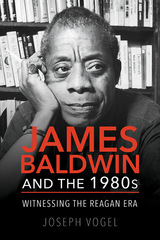 By the 1980s, critics and the public alike considered James Baldwin irrelevant. Yet Baldwin remained an important, prolific writer until his death in 1987. Indeed, his work throughout the decade pushed him into new areas, in particular an expanded interest in the social and psychological consequences of popular culture and mass media.

Joseph Vogel offers the first in-depth look at Baldwin's dynamic final decade of work. Delving into the writer's creative endeavors, crucial essays and articles, and the impassioned polemic The Evidence of Things Not Seen, Vogel finds Baldwin as prescient and fearless as ever. Baldwin's sustained grappling with "the great transforming energy" of mass culture revealed his gifts for media and cultural criticism. It also brought him into the fray on issues ranging from the Reagan-era culture wars to the New South, from the deterioration of inner cities to the disproportionate incarceration of black youth, and from pop culture gender-bending to the evolving women's and gay rights movements.

Astute and compelling, James Baldwin and the 1980s revives and redeems the final act of a great American writer.

AUTHOR BIOGRAPHY
Joseph Vogel is an assistant professor of English at Merrimack College. He is the author of Man in the Music: The Creative Life and Work of Michael Jackson.
REVIEWS
"Among the most valuable contributions of Vogel's book is an entire chapter devoted to Baldwin's as yet unpublished play, The Welcome Table. . . . Vogel's adept interpretation of the play . . . is among the strongest works on late Baldwin now in print." --Journal of American History


"Vogel help[s] us to 'catch up' to Baldwin by freeing us from previous misconceptions of the important work he did in his late career." --African American Review

"Clearly and concisely written with a snap in his prose. No one has focused on this era and its unique importance in the way Joseph Vogel has done."--Ed Pavlic, author of Who Can Afford to Improvise? James Baldwin and Black Music, the Lyric and the Listeners

TABLE OF CONTENTS
Title
Copyright
Contents
Acknowledgments
Introduction
1. The Price of the Beat: Black Popular Music and the Crossover Dream
2. Freaks in the Reagan Era: Androgyny and the American Ideal of Manhood
3. The Welcome Table: Intimacy, AIDS, and Love
4. “To Crush the Serpent”: The Religious Right and the Moral Minority
5. Things Not Seen: Covering Tragedy, from the Terror in Atlanta to Black Lives Matter
Epilogue
Chronological Bibliography
Notes
Bibliography
Index