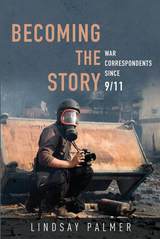 The September 11 attacks produced great changes in journalism and the lives of the people who practiced it. Foreign reporters felt surrounded by the hate of American colleagues for "the enemy." Americans in combat areas became literal targets of anti–U.S. sentiment. Behind the lines, editors and bureau chiefs scrambled to reorient priorities while feeling the pressure of sending others into danger.

Becoming the Story examines the transformation of war reporting in the decade after 9/11. Lindsay Palmer delves into times when print or television correspondents themselves received intense public scrutiny because of an incident associated with the work of war reporting. Such instances include Daniel Pearl’s kidnapping and murder; Bob Woodruff’s near-fatal injury in Iraq; the expulsions of Maziar Bahari and Nazila Fathi from Iran in 2009; the sexual assault of Lara Logan; and Marie Colvin’s 2012 death in Syria. Merging analysis with in-depth interviews of Woodruff and others, Palmer shows what these events say about how post-9/11 conflicts transformed the day-to-day labor of reporting. But they also illuminate how journalists’ work became entangled with issues ranging from digitization processes to unprecedented hostility from all sides to the political logic of the War on Terror.

AUTHOR BIOGRAPHY
Lindsay Palmer is an assistant professor of global media ethics at the University of Wisconsin, Madison.
REVIEWS
"[Palmer] is on to something as she as she examines how Western audiences and readers are encouraged to empathize with war correspondents as heroes, victims, or martyrs."--The New York Review of Books


"A worthy contribution to the scholarly literature on media, war, and conflict. It should be required reading for scholars and students of journalism and political communication. It adds significant depth to our understanding of how reporters are affected by nationalistic and neoliberal business motives in their reporting of international events." --Journalism & Mass Communication Quarterly


"Becoming the Story is a valuable addition to the field of critical media studies, journalism history, and twenty-first-century military history." --H-Net Reviews