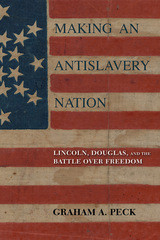 This sweeping narrative presents an original and compelling explanation for the triumph of the antislavery movement in the United States prior to the Civil War. Abraham Lincoln's election as the first antislavery president was hardly preordained. From the country's inception, Americans had struggled to define slavery's relationship to freedom. Most Northerners supported abolition in the North but condoned slavery in the South, while most Southerners denounced abolition and asserted slavery's compatibility with whites' freedom. On this massive political fault line hinged the fate of the nation.

Graham A. Peck meticulously traces the conflict over slavery in Illinois from the Northwest Ordinance in 1787 to Lincoln's defeat of his archrival Stephen A. Douglas in the 1860 election. Douglas's attempt in 1854 to persuade Northerners that slavery and freedom had equal national standing stirred a political earthquake that brought Lincoln to the White House. Yet Lincoln's framing of the antislavery movement as a conservative return to the country's founding principles masked what was in fact a radical and unprecedented antislavery nationalism. It justified slavery's destruction but triggered the Civil War.

Presenting pathbreaking interpretations of Lincoln, Douglas, and the Civil War's origins, Making an Antislavery Nation shows how battles over slavery paved the way for freedom's triumph in America.

AUTHOR BIOGRAPHY
Graham A. Peck is the Wepner Distinguished Professor of Lincoln Studies in the Department of History at the University of Illinois at Springfield. He is the writer, director, and producer of the award-winning documentary Stephen A. Douglas and the Fate of American Democracy. His film, podcasts, and publications are available at civilwarprof.com.
REVIEWS
"Peck has written a book that demands attention."--Journal of the Civil War Era


"Sure to interest anyone looking for a fine-grained account of pre-Civil War politics."--Publisher's Weekly


"Graham Peck offers a sophisticated analysis of the forces that led to the Civil War, emphasizing how Abraham Lincoln disguised the wolf of radical antislavery nationalism with conservative sheep’s clothing, and how Stephen A. Douglas was gradually crushed between the upper millstone of Southern intransigence and the nether millstone of Northern disaffection for his toleration of slavery."--Michael Burlingame, author of Abraham Lincoln: A Life