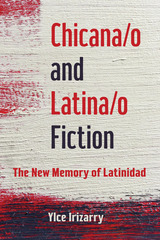 In this new study, Ylce Irizarry moves beyond literature that prioritizes assimilation to examine how contemporary fiction depicts being Cuban, Dominican, Mexican, or Puerto Rican within Chicana/o and Latina/o America.

Irizarry establishes four dominant categories of narrative--loss, reclamation, fracture, and new memory--that address immigration, gender and sexuality, cultural nationalisms, and neocolonialism. As she shows, narrative concerns have moved away from the weathered notions of arrival and assimilation. Contemporary Chicana/o and Latina/o literatures instead tell stories that have little, if anything, to do with integration into the Anglo-American world. The result is the creation of new memory. This reformulation of cultural membership unmasks the neocolonial story and charts the conscious engagement of cultural memory. It outlines the ways contemporary Chicana/o and Latina/o communities create belonging and memory of their ethnic origins.

An engaging contribution to an important literary tradition, Chicana/o and Latina/o Fiction privileges the stories Chicanas/os and Latinas/os remember about themselves rather than the stories of those subjugating them.