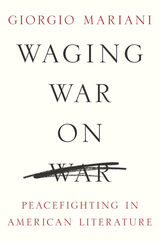 The notion that war plays a fundamental role in the United States' idea of itself obscures the rich--and by no means naïve--seam of anti-war thinking that winds through American culture. Non-violent resistance, far from being a philosophy of passive dreamers, instead embodies Ralph Waldo Emerson's belief that peace "can never be defended, never be executed, by cowards."

Giorgio Mariani rigorously engages with the essential question of what makes a text explicitly anti-war. Ranging from Emerson and Joel Barlow to Maxine Hong Kingston and Tim O'Brien, Waging War on War explores why sustained attempts at identifying the anti-war text's formal and philosophical features seem to always end at an impasse. Mariani moves a step beyond to construct a theoretical model that invites new inquiries into America's nonviolent, nonconformist tradition even as it challenges the ways we study U.S. warmaking and the cultural reactions to it. In the process, he shows how the ideal of nonviolence and a dislike of war have been significant, if nonhegemonic, features of American culture since the nation's early days.

Ambitious and nuanced, Waging War on War at last defines anti-war literature while exploring the genre's role in an assertive peacefighting project that offered--and still offers--alternatives to violence.

AUTHOR BIOGRAPHY
Giorgio Mariani is a professor of American literature at the Sapienza University of Rome. He is the author of Spectacular Narratives: Representations of Class and War in Stephen Crane and American Popular Literature of the 1890s.
REVIEWS
"Waging War on War is a fascinating, learned, lively, and much-needed study of how different American writers and activists have imagined, defined, and fought for peace, even as they have gone to war or confronted the history of U.S. interventionism." --IMPACT

"A rigorous examination of anti-war literature, and the result of decades of reading, writing and teaching."--Times Literary Supplement