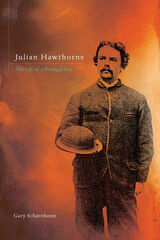 Julian Hawthorne (1846-1934), Nathaniel Hawthorne's only son, lived a long and influential life marked by bad circumstances and worse choices. Raised among luminaries such as Thoreau, Emerson, and the Beecher family, Julian became a promising novelist in his twenties, but his writing soon devolved into mediocrity.

What talent the young Hawthorne had was spent chasing across the changing literary and publishing landscapes of the period in search of a paycheck, writing everything from potboilers to ad copy. Julian was consistently short of funds because--as biographer Gary Scharnhorst is the first to reveal--he was supporting two households: his wife in one and a longtime mistress in the other.

The younger Hawthorne's name and work ethic gave him influence in spite of his haphazard writing. Julian helped to found Cosmopolitan and Collier's Weekly. As a Hearst stringer, he covered some of the era's most important events: McKinley's assassination, the Galveston hurricane, and the Spanish-American War, among others.

When Julian died at age 87, he had written millions of words and more than 3,000 pieces, out-publishing his father by a ratio of twenty to one. Gary Scharnhorst, after his own long career including works on Mark Twain, Oscar Wilde, and other famous writers, became fascinated by the leaps and falls of Julian Hawthorne. This biography shows why.

AUTHOR BIOGRAPHY
Gary Scharnhorst is Distinguished Professor Emeritus of English at the University of New Mexico and the author of Kate Field: The Many Lives of a Nineteenth-Century American Journalist.
REVIEWS

"In a superbly researched and engaging narrative, Gary Scharnhorst has pulled together all the facts of this fascinating if somewhat outrageous life.  In sum, he has given us a keenly argued biography with a new angle on his famous father, who died when Julian was a teenager and who did not take much interest in his prodigal son."--American Literary Realism


"A 'must read.' Julian led a life stranger than fiction, and Scharnhorst, who writes with humor and an eye for detail, has offered a riveting account of the extraordinary events, pitfalls, and relationships that comprised his subject's life."--The New England Quarterly