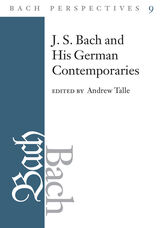 This provocative addition to the Bach Perspectives series offers a counternarrative to the isolated genius status that J. S. Bach and his music currently enjoy. Contributors contextualize Bach by examining the output, reputation, and compositional practices of his contemporaries in Germany whose work was widely played and enjoyed in his time, including Georg Philipp Telemann, Christoph Graupner, Gottlieb Muffat, and Johann Adolf Scheibe. Essays place Bach and his work in relation to his peers, examining avenues of composition they took while he did not and showing how differing treatments of the same subjects or texts resulted in markedly different compositional results and legacies. By looking closely at how Bach's contemporaries addressed the tasks and challenges of their time, this project provides a more nuanced view of the musical world of Bach's time while revealing in more specific terms than ever how and why Bach's own music remains fresh and compelling.

In this volume, Wolfgang Hirschmann proposes an ethnographic approach that contextualizes Bach's works, addressing the aesthetic paths he took as well as those he did not pursue. Steven Zohn's essay considers Telemann's contribution to the orchestral Ouverture genre, observering how Telemann's approach to integrating the national styles of his time was quite different from, but no less rich than, Bach's. Andrew Talle compares settings and strategies of Vergnügte Ruh, beliebte Seelenlust by Bach and Graupner. Alison Dunlop presents valuable primary research on Muffat, the most commonly cited keyboard music composer in Vienna during Bach's lifetime. Finally, Michael Maul sheds new light on the Scheibe-Birnbaum controversy, contextualizing the most famous critique of J. S. Bach's compositional style by discussing the other composers that Scheibe critiqued.

AUTHOR BIOGRAPHY
Andrew Talle is the chair of the musicology department at the Peabody Conservatory of The Johns Hopkins University.
TABLE OF CONTENTS
Cover
Title Page
Copyright
Contents
Preface
Abbreviations
“He Liked to Hear the Music of Others”: Individuality and Variety in the Works of Bach and His
Aesthetic Mediation and Tertiary Rhetoric in Telemann’s VI Ouvertures à 4 ou 6
Bach, Graupner, and the Rest of Their Contented Contemporaries
The Famously Little-Known Gottlieb Muffat
Bach versus Scheibe: Hitherto Unknown Battlegrounds in a Famous Conflict
Contributors
General Index