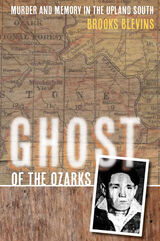 In 1929, in a remote county of the Arkansas Ozarks, the gruesome murder of harmonica-playing drifter Connie Franklin and the brutal rape of his teenaged fiancée captured the attention of a nation on the cusp of the Great Depression. National press from coast to coast ran stories of the sensational exploits of night-riding moonshiners, powerful "Barons of the Hills," and a world of feudal oppression in the isolation of the rugged Ozarks. The ensuing arrest of five local men for both crimes and the confusion and superstition surrounding the trial and conviction gave Stone County a dubious and short-lived notoriety.

Closely examining how the story and its regional setting were interpreted by the media, Brooks Blevins recounts the gripping events of the murder investigation and trial, where a man claiming to be the murder victim--the "Ghost" of the Ozarks--appeared to testify. Local conditions in Stone County, which had no electricity and only one long-distance telephone line, frustrated the dozen or more reporters who found their way to the rural Ozarks, and the developments following the arrests often prompted reporters' caricatures of the region: accusations of imposture and insanity, revelations of hidden pasts and assumed names, and threats of widespread violence. Locating the past squarely within the major currents of American history, Ghost of the Ozarks: Murder and Memory in the Upland South paints a convincing backdrop to a story that, more than 80 years later, remains riddled with mystery.
AUTHOR BIOGRAPHY

A native of the Arkansas Ozarks, Brooks Blevins is the Noel Boyd Professor of Ozarks Studies at Missouri State University. His other books include Arkansas/Arkansaw: How Bear Hunters, Hillbillies, and Good Ol' Boys Defined a State and Hill Folks: A History of Arkansas Ozarkers and Their Image.

TABLE OF CONTENTS
Cover
Title Page
Copyright
Contents
Acknowledgments
Prologue
1. Vigilantism and Vengeance
2. Barons of the Hills
3. The Ozarks in the Crosshairs
4. A Ghost’s Tale
5. The Back-stay of Crick and Charley
6. Is He or Ain’t He?
7. The Man behind the French Harp
8. “He Hain’t My Connie”
9. The Identification of a Dead Man
Illustrations follow page 136
10. The Farewell Tour of a Ghost
11. Folklore and Fact in the Aftermath
Appendix A. Change and Persistence in the Rural Ozarks: An Essay on Setting
Appendix B. A Musical Coda
Notes
Bibliography
Index
Back Cover