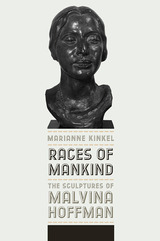 Races of Mankind: The Sculptures of Malvina Hoffman
by Marianne Kinkel
University of Illinois Press, 2011
Cloth: 978-0-252-03624-8
In 1930, Chicago's Field Museum of Natural History commissioned sculptor Malvina Hoffman to produce three-dimensional models of racial types for an anthropology display called The Races of Mankind. Marianne Kinkel’s cultural biography of the long-running exhibition measures how Hoffman’s ninety-one bronze and stone sculptures impacted perceptions of race in twentieth-century visual culture. Kinkel looks at how Hoffman's collaborations with curators and anthropologists transformed the commission from a traditional physical anthropology display into a fine art exhibit. She also tracks appearances of statuettes of the works in New York and Paris exhibitions and looks at how publishers used images of the sculptures to illustrate atlases, maps, and encyclopedias. The volume concludes with the dismantling of the exhibit in 1969 and the Field Museum’s redeployment of some of the sculptures in new educational settings.

A fascinating cultural history, Races of Mankind examines how we continually re-negotiate the veracity of race through collaborative processes involved in the production, display, and circulation of visual representations.

AUTHOR BIOGRAPHY
Marianne Kinkel is an associate professor of art history at Washington State University.
REVIEWS
"A provocative new study. . . . Kinkel shows how the images contributed to a contentious and mutating discourse on race through the end of the twentieth century."Art in America


"Covers every detail concerning Malvina Hoffman'sRaces of Mankind--from the artist's career through her extensive preparation to the creation of work and its reception. . . . Recommended"--Choice


Acknowledgments   xi
Introduction   1
1. Initial Plans for a Physical Anthropology Display   21
2. Malvina Hoffman as Professional Artist   34
3. Producing the Sculptures and Building Consensus   48
4. The Hall of the Races of Mankind   82
5. Life beyond the Field Museum: Exhibiting Statuettes during the 1930s   124
6. Deploying the Races of Mankind Figures during the 1940s   144
Conclusion: Retraction and Redeployment of the Sculptures in Chicago   183
Abbreviations   201
Notes   203
Bibliography   245
Index   263