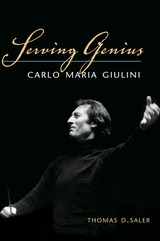 Stints with the Chicago Symphony Orchestra, Philharmonia Orchestra, Vienna Symphony, and Los Angeles Philharmonic made Carlo Maria Giulini one of the most renowned and beloved conductors of the twentieth century. Thomas D. Saler tells the intertwined stories of Giulini's extraordinary career and fascinating personal life, including the maestro's musical awakening, his student years in Rome, his nine months in hiding for his anti-fascist beliefs during World War II, and his selfless devotion to his wife. Throughout, Saler explores how Giulini conveyed his own nuanced musicianship to an orchestra and addresses the conductor's repertoire of choice, leadership style, and moral framework. Extensive interviews with Giulini's family, critics, arts administrators, orchestra members, and collaborating soloists round out an unprecedented portrait of an extraordinary musical figure.

Thomas D. Saler is a conservatory trained musician and was a longtime member of the Milwaukee Symphony Chorus. He is the author of several books on personal finance..

"A thorough, balanced and illuminating portrait of the charismatic Italian as man and maestro."--Chicago Tribune

"It was wonderful to get to know the man we have met so often in his music-making."--American Record Guide


"A fascinating full account of the . . . conductor's unlikely path to his house in the Hollywood Hills."--Los Angeles Times