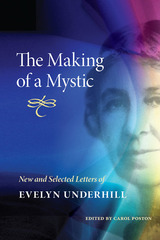 The Making of a Mystic: New and Selected Letters of Evelyn Underhill
by Evelyn Underhill
edited by Carol Poston
University of Illinois Press, 2010
Cloth: 978-0-252-03483-1
Evelyn Underhill (1875-1941) achieved international fame with the publication of her book Mysticism in 1911. Continuously in print since its original publication, Mysticism remains Underhill's most famous work, but in the course of her long career she published nearly forty books, including three novels and three volumes of poetry, as well as numerous poems in periodicals. She was the religion editor for Spectator, a friend of T. S. Eliot (her influence is visible in his last masterpiece, Four Quartets), and the first woman invited to lecture on theology at Oxford University. Her interest in religion extended beyond her Anglican upbringing to embrace the world's religions and their common spirituality.

In time for the centennial celebration of her classic Mysticism, this volume of Underhill's letters will enable readers and researchers to follow her as she reconciled her beliefs with her daily life. The letters reveal her personal and theological development and clarify the relationships that influenced her life and work. Hardly aloof, she enjoyed the interests, mirth, and compassion of close friendships.

Drawing from collections previously unknown to scholars, The Making of a Mystic shows the range of Evelyn Underhill's mind and interests as well as the immense network of her correspondents, including Sir James Frazier and Nobel Prize laureate Rabindranath Tagore. This substantial selection of Underhill's correspondence demonstrates an exceptional scope, beginning with her earliest letters from boarding school to her mother and extending to a letter written to T. S. Eliot from what was to be her deathbed in London in 1941 as the London Blitz raged around her.

AUTHOR BIOGRAPHY
Carol Poston is a professor emerita of English and coordinator of women's studies at Saint Xavier University, Chicago. She is the editor of Mary Wollstonecraft's A Vindication of the Rights of Woman and Letters Written during a Short Residence in Sweden, Norway, and Denmark.
REVIEWS
"An engaging book."--Presence:  An International Journal of Spiritual Direction


"[Underhill] reminds us how Christian women of the last century were able to exercise intellectual influence and unofficial leadership with faithfulness and love."--Commonweal


"This correspondence reveals the intimate Evelyn Underhill--friend, spiritual guide, wife, pacifist--whose life spanned the age of Victoria through the horrors of two global wars. These letters serve as a companion piece to Underhill's pioneering books on mysticism and the spiritual life and explore the making of this foremother of contemporary spirituality. Carol Poston has retrieved a treasure for all of us."--Dana Greene, author of Evelyn Underhill: Artist of the Infinite Life