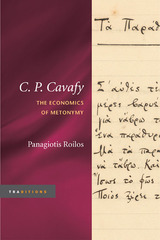 Konstantinos P. Kavafis--known to the English-reading world as C. P. Cavafy--has been internationally recognized as an important poet and attracted the admiration of eminent literary figures such as E. M. Forster, F. T. Marinetti, W. H. Auden, George Seferis, and James Merrill. Cavafy's idiosyncratic poetry remains one of the most influential and perplexing voices of European modernism.

Focusing on Cavafy's intriguing work, this book navigates new territories in critical theory and offers an interdisciplinary study of the construction of (homo)erotic desire in poetry in terms of metonymic discourse and anti-economic libidinal modalities. Panagiotis Roilos shows that problematizations of art production, market economy, and trafficability of erôs in diverse late-nineteenth and early twentieth-century European sociocultural and political contexts were re-articulated in Cavafy's poetry in new subversive ways that promoted an "unorthodox" discursive and libidinal anti-economy of jouissance.

AUTHOR BIOGRAPHY
Panagiotis Roilos is professor of modern Greek studies and of comparative literature at Harvard University. He is the author of Amphoteroglossia: A Poetics of the Twelfth-Century Medieval Greek Novel and the coauthor (with Dimitrios Yatromanolakis) of Towards a Ritual Poetics.
REVIEWS
"Recommended."--Choice


"A gem of original thought. I have not read anything else on Cavafy that uses philological analysis as acutely and with as sure a hand. This book must be read by everyone who is interested in seeing modernist poetry and especially C. P. Cavafy in a fresh way."--John Chioles, author of Aeschylus: Mythic Theatre, Political Voice