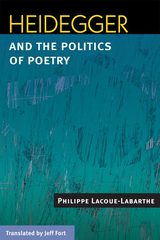 Heidegger and the Politics of Poetry
by Philippe Lacoue-Labarthe
translated by Jeff Fort
University of Illinois Press, 2006
Cloth: 978-0-252-03153-3

This volume collects and translates Philippe Lacoue-Labarthe’s studies of Heidegger, written and revised between 1990 and 2002. All deal with Heidegger’s relation to politics, specifically through Heidegger’s interpretations of the poetry of Hölderlin. Lacoue-Labarthe argues that it is through Hölderlin that Heidegger expresses most explicitly his ideas on politics, his nationalism, and the importance of myth in his thinking, all of which point to substantial affinities with National Socialism.

Lacoue-Labarthe not only examines the intellectual background--including Romanticism and "German ideology"--of Heidegger's uses and abuses of poetry, he also attempts to reestablish the vexed relationship between poetry and philosophy outside the bounds of the Heideggerian reading. He turns to Walter Benjamin and Theodor Adorno, as well as Paul Celan, arguing for the necessity of poetry as an engagement with history. While Heidegger's readings of Hölderlin attempt to appropriate poetry for mythic and political ends, Lacoue-Labarthe insists that poetry and thought can, and must, converge in another way. Jeff Fort provides a precise translation capturing the spirit and clarity of Lacoue-Labarthe’s writing, as well as an introduction clearly situating the debates addressed in these essays.

Philippe Lacoue-Labarthe is professor emeritus of philosophy and aesthetics at the University of Strasbourg. Five of his books have been previously translated into English, including Typography and Poetry as Experience. Jeff Fort’s previous translations include Jacques Derrida’s For What Tomorrow... and Jean Genet’s The Declared Enemy.

“Lacoue-Labarthe’s approach to Heidegger is unique in that he combines devastating criticism with an appreciation of the immense importance Heidegger’s thought still has for the future of philosophy.”--Southern Humanities Review