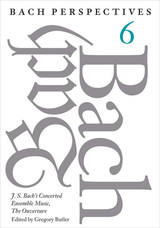 The sixth volume in the Bach Perspectives series opens with Joshua Rifkin's seminal study of the early source history of the B-minor orchestral suite. Rifkin elaborates on his discovery that the work in its present form for solo flute goes back to an earlier version in A minor, ostensibly for solo violin. He also takes the discovery as the point of departure for a wide-ranging discussion of the origins and extent of Bach's output in the area of concerted ensemble music.

In other essays, Jeanne Swack presents an enlightening comparison of Georg Phillip Telemann's and Bach's approach to the French overture as concerted movements in their church cantatas. Steven Zohn views the B-minor orchestral suite from the standpoint of the "concert en ouverture." In addition, Zohn responds to Rifkin by suggesting Bach may have scored the early version of the B-minor orchestral suite for flute.

Gregory Butler is a professor emeritus of musicology at the University of British Columbia. He is the author of Bach's Clavier-Übung III: The Making of a Print.

"Anyone concerned with Bach or Telemann scholarship, or even merely with German late-Baroque music, will profit from this book."--Music and Letters

"Joshua Rifkin, whose essay on Bach's Ouverture, BWV 1067 forms the major part of this volume, is one of the most virtuosic scholars in the positivist musicology."--Early Music History