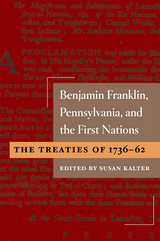 This is an annotated edition of the treaties between the British colonies and Indian nations, originally printed and sold by Benjamin Franklin. Last published in 1938, Benjamin Franklin, Pennsylvania, and the First Nations makes these important treaties available once again, featuring a simpler, easier-to-read format, extensive explanatory notes, and maps. A detailed introduction by Susan Kalter puts the treaties in their proper historical and cultural context.

This carefully researched edition shows these treaties to be complex intercultural documents, and provides significant insight into the British colonists’ relationship with native peoples of North America. They also reveal the complexity of Benjamin Franklin’s perceptions of Native Americans, showing him in some negotiations as a promoter of the Indian word against the colonial one. Finally, the treaties offer an enormous wealth of linguistic, aesthetic, and cultural information about the Iroquois, the Delawares, and their allies and neighbors.

Susan Kalter is an assistant professor of English at Illinois State University, Normal.