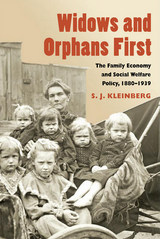 The experiences of widows and their children during the Progressive Era and the New Deal depended on differences in local economies and values. How did these widely varied experiences impact the origins of the welfare state?

S. J. Kleinberg delves into the question by comparing widows' lives in three industrial cities with differing economic, ethnic, and racial bases. Government in Fall River, Massachusetts, saw employment as a solution to widows' poverty and as a result drastically limited public charity. In Pittsburgh, widows received sympathetic treatment. Few jobs existed for them or their children; indeed, the jobs for men were concentrated in "widowmaking" industries like steel and railroading. With a large African American population and a diverse economy that relied on inexpensive child and female labor, Baltimore limited funds for public services. African Americans adapted by establishing their own charitable institutions.

A fascinating comparative study, Widows and Orphans First offers a one-of-a-kind look at social welfare policy for widows and the role of children in society during a pivotal time in American history.

S. J. Kleinberg is professor at Brunel University and author of The Shadow Of The Mills: Working-Class Families in Pittsburgh, 1870–1907 and Women in the United States, 1830-1945.

REVIEWS
"Offer[s] a compelling and important corrective to existing literature that too often uncritically celebrates the achievements of Progressive Era reformers."--Journal of the Gilded Age and Progressive Era


"Historians are aware of the race and class biases built into social welfare; much time has been spent analyzing the gendered nature of social provisions. Kleinberg is well versed in that literature and frequently links her account to the appropriate scholarship. Her original contribution here is to focus on one group of the so-called 'deserving poor' - widows - and examine the variety of social provisions affecting them over time."--Historian