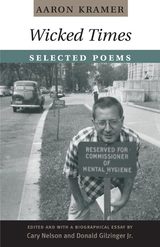 Wicked Times: SELECTED POEMS
by Aaron Kramer and Cary Nelson
University of Illinois Press, 2004
Cloth: 978-0-252-02918-9
This is the collected work of a major, versatile American poet passionately engaged with everything from the Holocaust and the Spanish Civil War to his love for New York City and his wife. The editors argue that his long poem sequence, Denmark Vesey, stands as the most ambitious poem about African American history ever written by a white American. Wicked Times includes previously unpublished poems and the first detailed account of Kramer's life, along with photos and extensive explanatory notes.
AUTHOR BIOGRAPHY
Aaron Kramer (1921-97) is the author of The Alarm Clock, Denmark Vesey and Other Poems, and The Burning Bush. His poems have appeared in Kenyon Review and Icarus.  He is the editor of On Freedom’s Side: An Anthology of American Poems of Protest.Cary Nelson is Jubilee Professor of Liberal Arts and Sciences at the University of Illinois at Urbana-Champaign and general editor of The American Poetry Recovery Series. His most recent book with UIP is The Wound and the Dream: Sixty Years of American Poems about the Spanish Civil War.Donald Gilzinger Jr. is a professor of English at Suffolk County Community College in Selden, New York. His Aaron Kramer bibliography is available online at
http://www2.sunysuffolk.edu/gilzind/Akbib.htm
TABLE OF CONTENTS